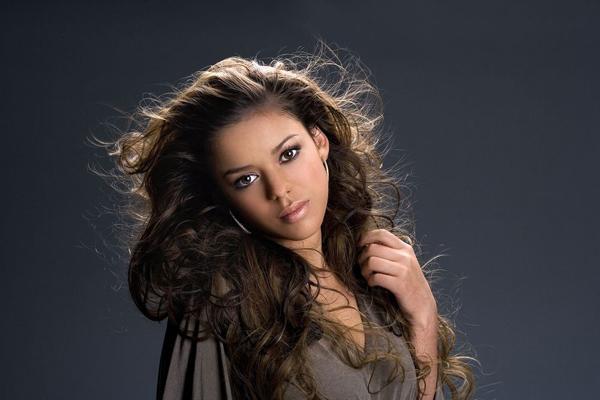 Life is but a string of precious moments. Like pearls on a necklace they shimmer and are the keepsakes memories of the time that lies between them. For Jamie, that first pearl was when her grandmother sang lullabies so that she would stop crying as a child. And from then on it seemed pretty clear that many of those pearly mementos would be filled to the brim with music. Jamie’s life began to vibrate, stirring into motion the lifes of all that came into contact with her amazing voice. In her small little hometown in California there is not a single soul that has not heard Jamie sing at school, at church or walking in the streets. The impression made was so immense, so overwhelming, that the whole town gathered for a fundraising concert to support Jamie’s musical talent and enable her to pursue a career in Los Angeles. Which is exactly what Jamie did, starting to audition for record contracts, as well as modelling for an agency in LA.

But life is not only those pearly moments – concerts, events, and photo shoots. There is lots of string to cross before the next pearl, so Jamie got a taste of that too. First high hopes, then bitter tears – whenever a chance for success disappeared as suddenly as it had turned up. The string seemed endless and Jamie was about to give up and go back home defeated when her modelling agent called and informed her about an audition held by German Paramedia, the longtime management company behind the internationally successful project SWEETBOX. Taking the chance head on, with her amazing voice Jamie immediately impressed executive producer Heiko Schmidt, who invited the extraordinary talent to the studio of  producer Bernd Burgdorf (Pink!) in Beverly Hills, for some test recordings the next day. And when Heiko offered her a contract, Jamie had in just a few days gone from defeated talent to being the new face of Sweetbox. So much for the pearls that lay in wait all along.

Since then Jamie has been travelling the globe, working with internationally renowned producers like Max Martin (Backstreet Boys, Britney Spears), Toby Gad  (Fergie, Ricky Martin), Michael Jay (Celine Dion, Kylie Minogue), Andy Marvel (Jessica Simpson, Madonna), Alex Cantrell (Jo Jo) and many more. She is singing and rehearsing to take her place as the new voice of Sweetbox, continuing the project’s tradition of talented vocal performances from Kimberly Kearney, Dacia Bridges, Tina Harris to Jade Villalon. With Jamie’s voice, Sweetbox will follow up on the success of over 3.5 million albums and 2.5 million singles, millions of compilations and digital downloads sold worldwide – count on that because Jamie still has a lot more pearls to come.