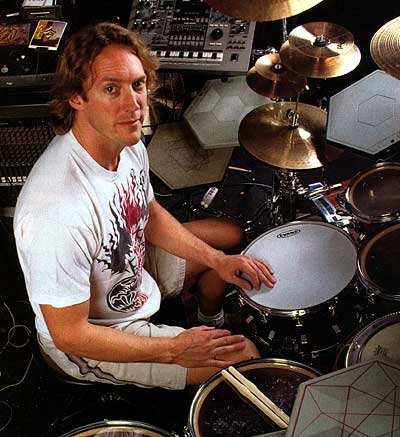 Wortraub: Again it has been 5 years between the last album and this one. During those five years the music industry has picked up a new favourite toy: the casting show – like American Idol. Is creative ability still part of the job as musician? Is it necessary to have a vision?
Danny: „It is necessary for us, to have our vision, to be true to our aims and our beliefs. We don’t really try to fit in any niche or anything. In America we have kind of established our own position. If these people don’t want to be creative and just get produced that doesn’t matter to us. We are going to keep doing what we do and believe in. We kind of exist outside of precedence because we started that way in the beginning. We were lucky enough that we were strong as a group and tight enough to maintain our position and stand by our beliefs and still have a career.“

Wortraub: The drum rhythms get trickier on this one. It gets harder to listen to.
Danny: „For me the compositions have sometimes a bit trickier places in them. To me, I feel like I progressed a bit and then my drumming fits in better with the songs this time. I was trying to be more conscious hitting the upcoming parts and instead of just doing some tricky move and paste on things, I try to make it more cohesive, more part of the composition. I try to fuse parts together, blend them in. Something I worked with my tabla teacher on. To be more instinctual about it. I hope it doesn’t sound too tricky though.

Wortraub: Is there a feeling that you need to top the last album?
Danny: „I don’t think we feel too much pressure, except the pressure we put on ourselves. We find our craft, but as we get older and become better musicians and think we all hope that every record gets better. If we did not get better at what we do, we would just stop.“

Wortraub: Is there more international influences on the record? Tablas and what else?
Danny: „We try to mix up and have a world full of texture in the songs. I have these pads, electronics that I use with my drums that allow me a lot more sounds and textures, all sorts of ethnic instruments and everything. I just sample them and put them in there. I was a lot more limited before with my old computer. Now I use a G5 Mac and just have gigs and gigs of memory. Thousands of different samples that allow me a lot more freedom because I don’t have to carry all those instruments with me. It is nice thing.

Wortraub: Is it on purpose that you spread the influences internationally?
Danny: „It is just not a conscious effort for me. I usually find the right texture for the chord change that Adam and Justin use for the feel of the song. I take what fits best in the song, what suits the song.“

Wortraub: How do you work? How do songs develop?
Danny: „The songs exist in pieces at a time. Maybe there is this bit, a riff or melody. Then we have like a jam on it. We discuss this, a psychedelic jam of a sort. The songs will turn out the way they want it. The whole process is recorded on a two-track. Then we can go back and listen. To find all the little jewels that have popped up along the way. The good moments. And then we find ways to piece these things together and then start arranging. It is very organic process but time consuming. Last time it took about a year. The time it took to record it, from the start to the master it took only six months.“

Wortraub: I was reminded of Pink Floyd when listening to the new albumÖ
Danny: „Yeah, the tunes lend themselves kind of in that direction. We never thought about though. I mean, there are definitely influences on this record. Metal, close to the edge like „Yes“ or „Relay“. I always liked it when there was one song that took up the whole side of the record. But we were hesitant to go in and write a song that was 17 min long, the third song of record. Now it is indexed as two songs, but in the course of the composition it was one. When I last looked there were 7 tracks, but since then they have been divided and now there is like 11 indexes, but it is really 7 songs. The names are still changing.“

Wortraub: The songs are denser, more tightly packed. Is there a conscious effort to put more meaning or more sound into them?
Danny: „Not so much a conscious effort, I think. A bigger difference this time is that Adam did a lot more layers of guitar on this record. In the tracking process almost every layer was at least done twice. Each speaker got it’s own tracking which adds to this wall of sound. I think the way the drums were recorded adds a little more density and impact. We found more concise ways to do things and to refine things so that the density would be better.“

Wortraub: „In connection with the „Lateralus“ album you mentioned the need to get around Europe more. Some festivals are confirmed for this summer, but will there also be a headline tour in Germany for the new album?“
Danny: „We will do the festivals, a couple fill in gigs in between. Then we will go back and do the US thing, Japan, Australia. Next year we will definitely come to Europe again. More a tour of cities and doing our own shows. That is the plan. Just our show and not fifty other bands. It will be something more like the Aenima-Tour.“

Wortraub: This album seems more political. Is it dealing with what happened in the last years?
Danny: „There wasn’t really an intentional effort towards that. We are all products of our environment and I think that is the reason why this album has a little more power and heaviness to it, we are just pissed off. I mean, we have the leader in history with the lowest IQ. That just makes us very unhappy or angry. I mean, we would never associate ourselves with something political like that, but we are a product of our environment and this influences. We have that angst or power and heaviness going, like we did on „undertow“ with this guys dad.“

Wortraub: When it comes to creativity there is one other rock band that has challenged Tools position as innovative rock-act. What do you think of System of a down?
Danny: „I like them. They are also a Hollywood band. We live in the same town, we cross paths a lot. They are one of the few bands out there, where when you hear a little piece, you know it is them. They have their own sound and their own identity, like Radiohead or Mars Volta. I appreciate bands like this. It strikes me when they do their own thing.“