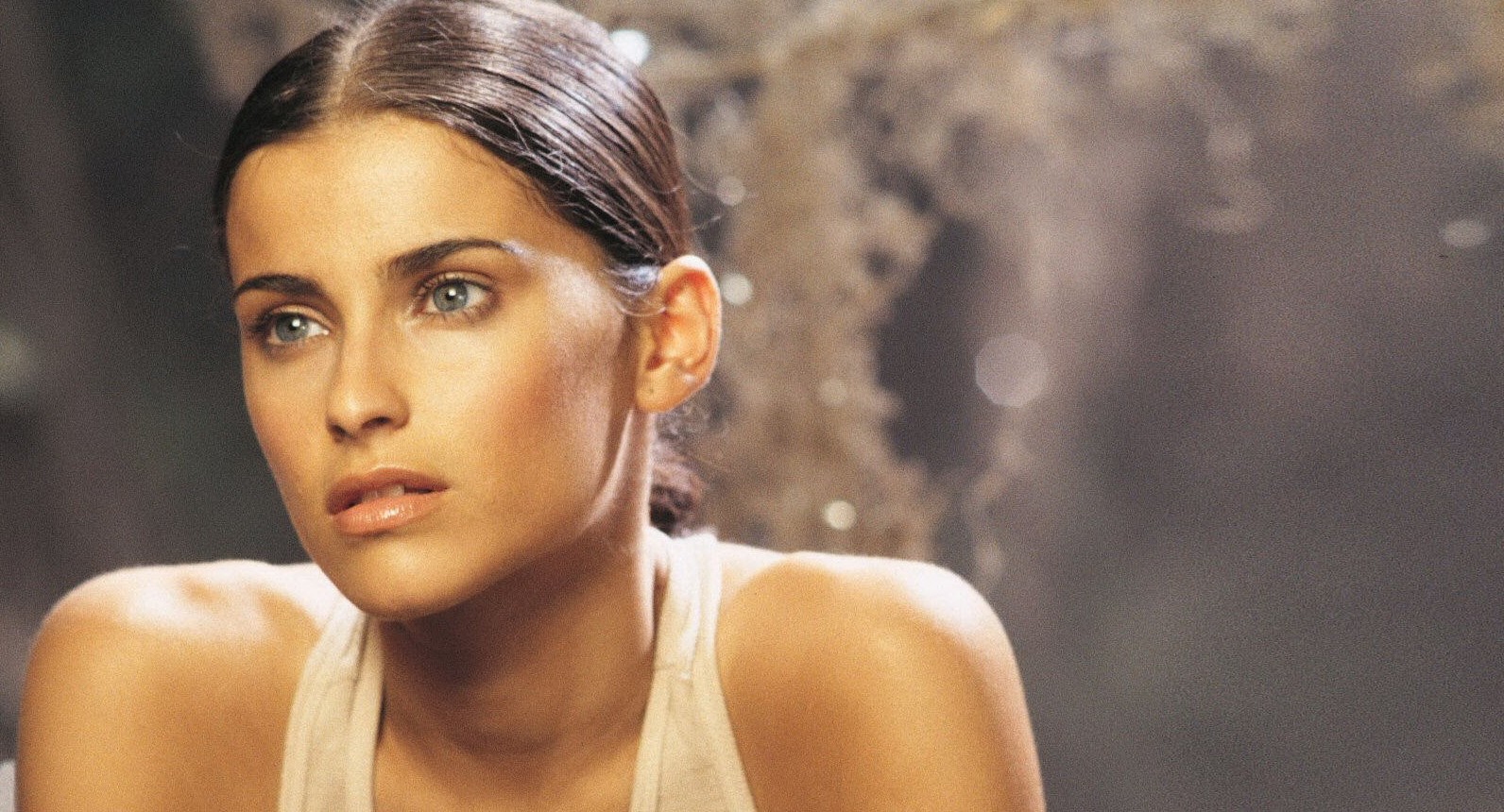 Wortraub: The new record seems to be a departure from „Loose“, it is not as dark, not as technologically experimental. Is there a conscious choice behind this?

Nelly: It is part of where I was at the time of recording the album. Although I started recording some of it already three years ago, most of the album was recorded just quite recently, up until January / February of this year. And those songs were done with Rodney Jenkins. When I met Rodney, him and I, we had this instant chemistry. And our chemistry was very childlike, it was kind of like our inner children had met and we were having fun at being very wild and free in the studio. But also, it was a very positive vibration and a very spiritual energy in the room. I think, it was just a matter of kind of getting the tracks to reflect that energy and honor that energy. I did not just plan it out but it just happened. It was kind of like falling in love, the music just kind of happened. I wasn’t sure why, but I guess I just felt like I was in the right place at the right time. But it is more simple. There is a simplicity to the album. There is a childlike energy that happened. I purposely did not want any darker songs on the album because I felt that they did not really reflect the mood of the album.

Wortraub: Was there anything in your life during the last years that allowed you to be more free and more playful?

Nelly: Yeah, I think it started with my trip to Kenya. I went to Kenya for the first time about a year and a half ago. It kind of really changed everything for me. I really remembered who I am and who I want to be. I came into myself. I really kind of felt this real joy for the first time, joy within the context of a community. Meeting lots of other people, my age, younger and older, families – feeling inspired again. I ended up dedicating my whole album to „Free the Children“ and writing songs about them, like the song „Miracle“. Believing in miracles. I think, you start believing in miracles again, you start to think like a child again. You start to be full of hope again. Even just in my life, just taking the time to read books, find new hobbies, travel … you know … I went on this really long camping trip, before I met Rodney, and I just unplugged my phone and was in Nature. Hiking, swimming in waterfalls – it was the first real break I ever had where I really felt like, you know where … it is that Wordsworth thing, supposedly he spend, I don’t know, he walks for miles and miles and miles … and that sort of inspired his poems. I think that is important. If you try to write a song, you have to feel free again, one with the universe. I forgot that, I forgot all about that. And I remembered it, right before I did the album.

Wortraub: That sounds like a very American concept, very Emersonian – communicating with Nature, being inspired and letting others take part in the creative process?

Nelly: It is funny, because I was in America too, I was in Tennessee. I was traveling through Tennessee actually, camping and hiking. It is really beautiful there, the Smoky Mountains. We were listening to lots of really great American country music, Johnny Cash, Willy Nelson and stuff like this. Creedence Clearwater Revival. I think I really picked up on the storytelling. Especially coming off of the Spanish album, where it is all about emotion and delivery. Combining that with the idea of stories in the songs … on this new album there is a lot of storytelling and a lot of it is nostalgic because I was influenced by those nostalgic country songs.

Wortraub: You mentioned a childlike feeling. When you are around your daughter, do you reflect on her feelings, do you pick up on her childhood?

Nelly: Yeah, for sure. Children are amazingly in the moment all the time. And I think that just by being around someone who is always in the moment has really taught me to be in the moment. Now I know how to relax. A big thing in my life has been looking at stress and trying to conquer that. Knowing when you are stressed and what causes that. Stress is a killer, stress kills us. So I think, if you can learn to manage that, you are automatically more happy and more childlike.

Wortraub: Being more in Nature is something we should all try?

Nelly: Yeah, there are a lot of studies that support that. A walk in Nature supposedly does everything: make you smarter, calm down your nervous system, make you more creative. So yeah, definitely.

Wortraub: The title of the album is „The Spirit Indestructible“ – what is that to you, where would you locate it?

Nelly: When I wrote the song, I was reading books about different things. I was reading one book about slavery in the Caribbean. The moment when Haiti became the first black republic and they overcame the French army, they ran to the mountains in order to start a new society. And they ended up beating Napoleons army which is a major accomplishment. And I started to think about, wow, how indestructible the human spirit has to be to accomplish this. And then, you know, we had the Arab spring last year – well, ongoing. But I don’t know. I just started to think about us human beings and how strong we are. Plus, I was thinking about athletic ability as well – people who push themselves. You know, the Olympics are on now. I can totally like hear the song in my head, when I watch, and the Olympians are proving that too. That they have this indestructible spirit and overcome mental weakness, overcome anything. That is why I think that humans are pretty cool.

Wortraub: But anything we have to overcome we have already inflicted ourselves, right?

Nelly: This is true. And I have a song on the album called „Enemy“. It says that, „I am my own worst enemy.“ Because I think that is a battle that everybody fights. We are all self-destructive. The more creative we are, the more self-destructive. I think that is a problem. Something to overcome in life. You have to learn how to be with yourself and not let your mind take over in a negative way. I kind of put everything into the album. It is cool because it has moments of reflection, I guess. The song – I almost did not put that song on my album because I thought, „Oh, I don’t really feel like I am my own worst enemy anymore. But I think I will include the song, to show a bit of the dark side, because I think you can’t have all light. I look for that even in artworks I admire. I like for it to have light and dark qualities. I mean, you need something to balance it out. On an album especially.

Wortraub: So, what has changed to not feel like your worst enemy anymore?

Nelly: I learned how to shut off the critic in my mind. I learned how to shut off the voice inside my head, that is not supportive. In life, in career, in everyday moments. I think everybody has a tape recorder in their mind and it is feeding them messages, either positive or negative. And I guess, the key is to shut off the negative tape recorder and turn on the positive. A lesson, not to be so hard on yourself. Not to criticize ourselves. We need to learn to be gentle with ourselves. We can be too harsh. It is hard to do that. I personally learned to not be my worst enemy anymore. When you are creative enough to create yourself, then you are also creative enough to destroy yourself. Whatever that means, not necessarily by drugs or alcohol, but more like in a outlook kind of way. How you see the world, that might destroy you too. Shutting yourself off. I go through phases like that. I think it is because I give so much in my job everyday. When I am out there and performing, it is a very giving job. I go out there and really give it. Giving every inch of how you feel. I can be quite a giving profession, so emotionally you have to give back, by meditating, by spending time in Nature, time to be easy with yourselves.

Wortraub: Musicians seem to be an amplified self – in regards to other people, everything is always more …

Nelly: Yeah, it is like being on a freeway. Autobahn, but not in a car.

Wortraub: You might be hit by something fast approaching?

Nelly: For sure, to be in front of so many people anything could happen. You could trip and fall, you could like … I don’t know, well … oh I guess not that many things could happen, but a few.

Wortraub: Have you ever experienced intense emotions from the audience, that tripped you up?

Nelly: Yeah, usually crying. Whenever I sing „Try“, there are always a few people in the front row crying. It is this emotional song, sad. I always start to cry, when I see someone else cry. So sometimes, yes, you get overcome by emotion. Or you might get really into a song and you might end up feeling a bit angry at something, not the audience but something inside. The emotions of the song. I have had experiences, shows, where I get out there and I am really sad and I cry the first song. Have that happened to me once and it was really scary. Don’t get me wrong I love being on stage, it is the best part of what I do. But it leaves you in a very vulnerable position. You might have a million people helping you on your team but you are the only one that has to go down on the ship, you are the one in the spotlight.

Wortraub: But there are even more supporters in front of you, right?

Nelly: Yes, for sure. But I mean weird things like loosing your voice or falling or you know. Weird things that could happen. Everything is about sharing the emotions with the crowd. It helps to see the love in the people when I am singing. They sing along, seem like they are in their zone. A happy Autobahn.

Wortraub: The metaphor does not really fit, does it? Like a semi heading your way?

Nelly: No, no, that is not what I meant. I think I mean that every car rushing by is a different energy or vibration, that is kind of what it is like. You are on there and you are enjoying it but yeah, like … anything could happen. … ah, I don’t know if that one works very well, sorry.

Wortraub: Well, thank you for the interview and all the answers you provided.