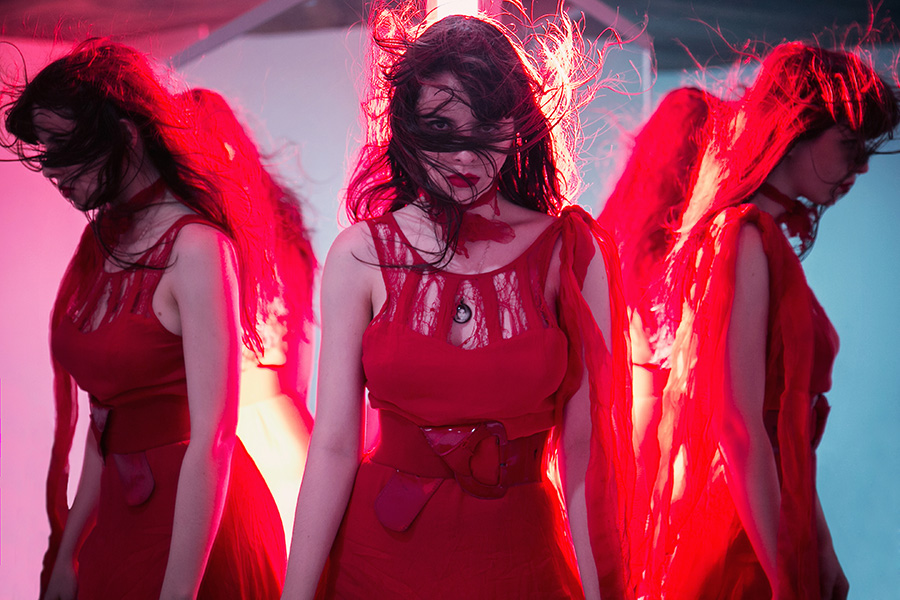 Wortraub: Your info states that the new album is about family, as much as it is about mental health – is there an inherent connection in the two?
Teri Gender Bender: Looking back at the record There seems to be an The inherent connection with a voice that seems to want to get rid of it’s love for humanity while in search for a kind of light. A sick mind denouncing it’s creator to come to realize that it just is what it is: acceptance of the two extremes. Pride or acceptance are the two roads and I think this record explores the side of the road of pride and resignation and towards the end of the record a sense of acceptance also resignation (with hints of closure) comes forth.

Wortraub: What motivated you do to do an album with these themes? How did you approach the subject matter?
Teri Gender Bender: Having a unique family to say the least. So many layers within a unit is beyond me.Also a slow lurking realization that all in life (as it is to me)comes with two extremes (or many more). it’s been the only constant in our Iives like the dying bond between children- mother- father – GOD, Ultra violence, incest, rape, silence, alcoholism, a web of lies, a hut of fear, a mindless determination, the light and the darkness, the before and after. Despite it all, there is no good or evil as I once thought there was. The overall message of the record is important to let go of the venom (the rotten fire) in order to grow and stay as immune from a break down of a mental relapse or having to be witness to it from a loved one. It has its consequences, too much abuse is too much too.

Wortraub: The songs are all named with bi-furcated titles – so are they schizophrenic expressions of family and mentality?
Teri Gender Bender: They could be held up for interpretation. For me it’s the amputation of a root from with in.

Wortraub: Why the doubly intriguing names?
Teri Gender Bender: I think it is a metaphor of a certain disconnection with life, with a detachment of child hood words and disassociation from their past in order to protect one self.

Wortraub: You talk about depression as an affliction you had to deal with close to you – how is your music positioned to such an introverted illness, sound and style are rather outgoing?
Teri Gender Bender: I think the adjacent sound textures and layerings are of resemblance of the mind breaking down. A daughter trying to make sense of it all within a very limited dark corner in search for hope and liberation hence the perspective of an outgoing vibe. Song intro for “give/UP” form example.

Wortraub: You have a few guests on the album – any specific reason you asked these personalities along for the ride?
Teri Gender Bender: The artists I invited to be on the record naturally gravitated for a collaboration, I met Mon Laferte thanks to Francisca Valenzuela and her feminist festival Ruidosa, she invited us and Jessy Bulbo for a Q and A and the energy between all the women was something from other world. And in some way or another we have all collaborated. I think Mon Laferte is a very dynamic trimenstional artist, she can do anything from singing in heavy metal black metal to singing operah music with Placido Domingo. Alice Bag is a one of those revolutionary icons you just can’t believe you know. Shit, same goes for Jello. Everyone who has worked on the record is a legend in their own right, I’m very fortunate to have been able to learn from them as a part of the recording process. Jello Biafra – Joe Gore- Jerry Harrison – DJ No Body, Eureka the Butcher, a spoken word piece written by Omar Rodriguez Lopez, to working with class act engineers  Chris Common, Jon De Baun and ET Thorgern over at Stinson Beach Studio, a gem over in Marin county.

Wortraub: How did you come to produce with Jerry Harrison? What did he bring to the album?
Teri Gender Bender: Jerry gave these new songs a home, not only on tape but in this realm, he gave the record refinement and elegant fierceness. He also added refinements to the arrangements for example spider/WAVES bridge etc, etc. It was very inspiring to bounce of ideas of of one another, I am thankful to be able to call him and his family friends.